I’m taking an informal poll.  Have you ever eaten a Twinkie?  Is it a generational thing?  If you have children, have they ever eaten Twinkies?  Are there hordes of young Twinkie consumers out there?  Do they get packed in lunch boxes?  Exactly who eats Twinkies anymore anyway?

I was growing up at the height of the Hostess Heyday   I’m sure to have sucked down a Twinkie or two in my time.

When Hostess announced they would be shutting the factory doors forever, I , along with everyone else, was strangely fascinated in how the life of such an iconic American edible would play out.

When the deal was done, there was apparently a mad rush for any and all last boxes of Ding Dongs, Ho Hos, and Twinkies left on the shelves.

Were these crazed shoppers stocking up on a favorite sugary treat before they were all gone?  Or was it something more sinister.  Were they thinking about trading in on nostalgia for cash?  Making a killing on eBay?  Black market Twinkies?

Well, come to find out you can find them on eBay.   When I last checked, there were 11,079 listings.  And at some pretty outrageous prices too if you’re desperate enough.

One young mother,interviewed in a segment for CBS news, actually lamented the fact that her daughter might never have the pleasure of eating a Twinkie.

Worse yet, she felt they were being robbed of a family tradition.

I almost fell off my chair when I read that.

Yes, food is often associated with traditions.  Turkey at Thanksgiving.  Watermelon on the Fourth of July.  Even s’mores on a camp-out.  They may not be especially healthy but at least there’s some labor involved.  But Twinkies?  That seems to be taking things to extremes if you ask me.  For a non-food. 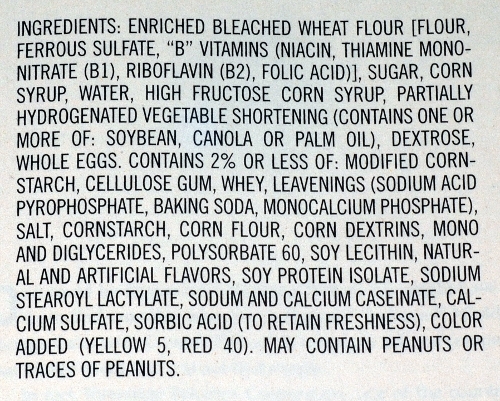 A chemistry teacher in Blue Hill, Maine, has the proof.  An experiment to test the life of a Twinkie has been ongoing now for nearly 40 years.  It’s still there, a bit brittle and certainly inedible but still there, nonetheless.

This is good news for all those who are nostalgic about Twinkies.  They will never die.